Why Do These Economists Still Have Jobs?

For any mainstream economists still reluctant to admit that a recession is underway, last Friday’s horrendous jobs report should have removed all doubts.

As I was driving to the radio studio to do my show last Friday morning, I heard Bloomberg Radio’s hosts interviewing Dr. James Glassman, the infamous and roundly mocked author of Dow 36,000*, who was pontificating that a May jobs number of 160,000 (private sector jobs created), the widely anticipated consensus figure, “would be great, but even 125,000 jobs would not be so bad either,” and a sign of a healthy economy.  (* Dow 36,000 was the 1999 book that predicted that the stock market and technology sector would continue to soar, likely bringing us to a valuation of over 36,000 in the DJIA by 2005. Instead, the DJIA fell below 6680 in 2008, and remains at half of that prediction seventeen years later.)

After the number was announced—private sector job creation was an abysmal 38,000 for May—Glassman, ever the irrational exuberant, dismissed the disastrous announcement as a “one-off,” a reaction similar to that of economists responding to April’s 160,000 jobs figure after Goldman Sachs had anticipated that 232,000 jobs had been created that month.  (Last Friday, even the 160,000 figure for April was revised downward to only 123,000, and the figures for February and March were also revised lower by nearly 60,000 jobs.)  All told, from February through May a whopping 290,000 fewer jobs were created than economists’ “consensus expectations,” and each month that passed saw an increase in the difference between the expectation and the reality.

I have news for Mr. Glassman.  A 109,000 jobs miss for April and a 122,000 jobs miss for May are not a “one-off.”  When combined with their misses for February and March, four straight months of downward revisions, each one larger than the prior month, are what we non-economists call “an accelerating trend,” not the one-time anomaly our dear doctor sees through his rose-colored glasses.

I’m reminded of a similar scene in the cult classic The Princess Bride, when atop the Cliffs of Insanity, Vizzini is repeatedly befuddled by the odds-defying exploits of the Man in Black, repeatedly shouting “Inconceivable!” 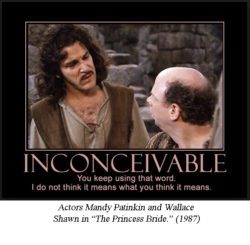 After three such outbursts, Inigo Montoya says to Vizzini, “You keep yoozing zat vurd.  I do not zink it means vut you zink it means…”  Like Vizzini, Dr. Glassman and his fellow cheering Keynesians keep proclaiming economic health, in response to which the data repeatedly disappoint.  One wonders if they understand what a healthy economy even looks like, while at least nine key indicators are flashing recession.

Clearly the economy is slowing, in the mining and energy sectors, the transportation and hospitality sectors, in retail sales and the implosion of retailer stocks that accompany it, in consumer confidence and, most noteworthy, in both corporate earnings and profits. Then this morning, the IRS revealed plunging U.S. tax receipts for 2016 to date: “The last two times the survey plunged this much, the U.S. was already in recession.” For many seasoned observers, the combination of just half of the data now coming from our beleaguered Fed-enabled economy, has never existed simultaneously outside of a recession.  Absent another intervention by the Fed, it is now all but certain that sometime soon, probably in September, we will find out that we’ve been in a recession since March or April of this year.

Since the start of 2014, the S&P 500 Index is higher by more than +20%. During this time, $291 billion has flowed out of domestic stock mutual funds alone.  The only thing keeping stocks from imploding—even though private investors have pulled $89 billion out of equity markets since then, is that corporations have been buying back shares of their own stock, often with cheaply borrowed money , thus shoring up their share prices as well as the S&P 500 overall.  These buybacks have no nutritional value for the markets or for the economy at large, and are akin to dipping a bucket in the shallow end of one’s pool, only to dump its contents 50 feet away in the deep end. Corporate buybacks as economic policy is a disaster waiting to happen, as the CEO of the world’s largest asset manager, Blackrock, wrote in an open letter to CEO’s over a year ago, in essence telling them they were eating their seed corn.

Since mid-January when RBS’ credit team openly encouraged their clients to “sell everything, except high quality bonds,” because 2016 was going to be “a cataclysmic year” and more about the return of their capital than the return on their capital, private investors and market watchers have been looking for signs to confirm that prediction.  John Hussman, perhaps the most accurate living market forecaster of the last 20 years, wrote on May 30th, “…I doubt that any shift in market action will reduce the likelihood of a 40%-55% loss in the S&P 500 in the coming months.” In an earlier blog post, Hussman had said “These are not worst-case scenarios, but rather a run of the mill expectation.”

Two weeks ago, I had the privilege of hearing Scott Minerd, Chief Global Investment Officer for Guggenheim Partners, address a gathering of top

advisors in Vienna, Austria. The title of his program was Helicopter Money: It’s Much Closer Than You Think, the content of which has since appeared on CNBC. During the Q&A, I cited several of the aforementioned economic statistics and asked Scott if in fact we weren’t overdue for a significant pullback in equities. Scott agreed saying, “Oh yes, I think we are in for a rough summer and fall, perhaps more, which is why I think central banks are positioning themselves to be even more proactive than they’ve been in the past.”

Scott was referring specifically to European Central Bank president Mario Draghi’s pledge to begin buying European corporate bonds with ECB Euros, a move that many have likened to Japan and China’s now-failed forays into equity-buying-by-government.  This is an important point for investors to understand: When one owns corporate bonds they are a loaner to a corporation. What Draghi is purposing is nothing less than loaning digitally created (no, they don’t even bother printing them any more) Euros to corporations via electronic fund transfers on a ten-year time horizon, knowing full well that most European corporations are unlikely to invest that capital in job creation, research and development, or capital expenditures/improvements, and more likely to cynically and artificially repurchase shares of their own stock in the open market, thus continuing the charade, albeit with borrowed funds.

One doesn’t need a Ph.D. in economics to understand the defaults to the ECB that are likely to occur in the coming years. Truly this is crony capitalism at its

worst, and it’s being enabled by central banks around the world—because if one does it and it works briefly, others will follow. Gone are the days when profits and earnings caused share prices to go up, legitimately and organically. In our current era, corporate boards need only to create the illusion of corporate health since, after all, if the stock price is going up, things must be good.

In summary, multiple leading economic indicators are trending lower, job creation has tapered significantly since February, honest economists are fearful of recession, the most accurate forecasters are expecting declines of over 40%, and much of the rise in our markets can be attributed to manipulation of share price, not organic earnings and profits.  Oh, and the “solutions” being proposed by central banks around the world are already known to have failed elsewhere.

Bottom Line: As our clients, you know that you can never lose money to a down market in any of the strategies that we employ on your behalf.  If the S&P 500 does decline by the lower percentage (40%) still forecasted by Hussman and others, you will hold your account values through that down year without a loss and “out-perform” the market by that same amount, more if you had funds in a Fixed Account.  This means that once the recovery is underway, your account will have at least a 40% “head start” over the market itself, as it earns market-linked interest amid that rising market!

If you’re new to us, or to this blog, perhaps having had it forwarded to you by one of our clients, and you’d like to learn more about how we achieve these results, please call our office to request a free copy of Patrick Kelly’s best-selling book, Stress-Free Retirement and schedule a complimentary review of your finances.