Is the Trump Rally Credible and Sustainable?

Watching the President’s State of the Union address on Tuesday night, investors were looking for words that would inspire confidence in our economy and those “wildly overbought” markets we’ve seen since Election Day.  At this writing, the “Trump rally” has added an astonishing $3.2 trillion dollars to capital markets in the U.S., and the S&P 500 is up over 13% since November 8th.  The day after the speech, the Dow was up as much as 350 points, as investors gave the President high marks for the economic vision he laid out for the country.

Consider where we are at present: Last month marked a full calendar year since the last 10% US equity market decline, and it’s now been seven months since the last 5% drawdown.  We’ve now had 96 straight days without a 1% pull-back in the market, something that’s only happened five other times in the last 37 years.  History shows us that in a year that follows a period defined by just 80 or more consecutive trading days without a 1% pullback, the median return is 15%. Stocks recently closed at record highs for 12 straight days for the first time in 30 years—during Ronald Reagan’s last year in office.  Many are beginning to wonder if the similarities to 1987 will stop there, since the market also crashed -23% on Black Monday in October of that year.

Others continue to maintain that we have inflated a premature bubble—since Congress hasn’t passed a single piece of the Trump agenda yet—atop the unjustifiable bubble of the last 4 years.  That bubble was based largely upon debt-financed stock buybacks by corporations, aided by an enabling Fed that kept interest rates too low for way too long.

A Crisis in Europe 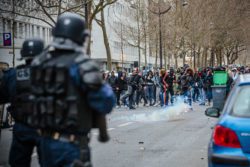 A central tenet that investors need to remember is that markets don’t like change.  And while the change-for-the-better that Trump has proposed is encouraging many, others cite the myriad of geopolitical risks in the market as threatening and even ominous. The last several months have seen various geopolitical crises rekindle, as several key European countries are flexing their independence in ways that could have dire consequences for currency and equity markets in 2017.  The highly-regarded geopolitical advisory firm, the Eurasia Group, has identified 2017 as the “most volatile” year for political risk since World War II.  Think about that.  Not the Korean War, Vietnam, the assassinations of the 1960s—not even the many crises of the Cold War were as foreboding as the events that are on tap for this year.

Among these, recent polls prior to upcoming elections in the Netherlands (March 15th) and France (April 23rd and May 7th) have turned in favor of leading candidates Gert Wilders and Marine Le Pen, each of whom has denounced the European Union’s refugee policies and strong-arm dictates, and promised a referendum vote on leaving the EU, much like Britain did last June.  Italy poses a similar threat as many analysts now believe such a divorce is the only way to rescue Italy’s ailing banks.  Italy’s oldest bank, the 544 year-old Monte dei Paschi di Siena, whose shares have collapsed by 98% of their former value, has now been delisted from trading and is pending a bailout.  Overall, Italian banks still hold over €390 billion worth of non-performing loans, nearly a third of those of the entire 17-natio

n Union, and an amount equal to one-fifth of Italy’s entire GDP as a nation.  2017 could literally bring the end of the European Union, tremendous upheaval in the currency markets, rioting across Europe, and a crashing of many overseas markets.  It will get worse before it gets better, perhaps much worse, and our own markets will not escape unscathed.

Why the Skeptics are Cautious

Famed market prognosticator John Hussman, a man who called the last two major declines weeks before they began and almost to the percentage point, is still calling for a 50-60% decline of the S&P500 “during the completion of this market cycle…”  Jeffrey Gundlach and Bill Gross agree, and David Stockman (President Reagan’s former budget director) thinks the idea of a Reagan-like 1980s boom is a fantasy.  As he recently told CNBC, “I see a recession coming down the pike in 2017.  The stock market is going to go down and it’s going to stay down long and hard because, for the first time in 25 years, there’s nothing to bail it out…”  Stockman continued, “…Sell the stocks, sell the bonds, get out of the casino.  …This is delusional.  This is the greatest suckers’ rally of all time.  It is based on pure hopium and not any analysis at all as to what it will take to push through a big tax cut.  Donald Trump is in a trap.  Today the debt is $20 trillion.  It’s 106% of GDP.  Yet he wants more defense spending, not less.  He wants drastic sweeping tax cuts for corporations and individuals.  He wants to spend more money on border security and law enforcement.  He wants this big trillion dollar infrastructure program.  You put all that together and it’s madness.  It doesn’t even begin to add up…”

Another metric to consider is the Shiller P/E ratio.   Today it stands at 29.9 times earnings, well above its long-run average of 16.7, meaning that stocks are nearly twice as expensive as their historical average.  It is also quite close to the 30x multiple prior to the Crash of 1929, and looks quite a bit like the valuations of the dot.com bubble of the late 1990s.  In this excellent and very readable article the authors point to the direct and linear correlation between the Shiller P/E and future equity market returns. If you bought US stocks when that measure was below 12, your average 10-year return was just over 10% (going back to 1926).  Conversely, if you bought when the Shiller PE was over 25 (as it is now), your average real 10-year return was just 0.5%.  Bottom Line:  If the mantra of “buy low, sell high” is to be adhered to, then “the time of maximum optimism is the best time to sell” , and that would be now.

Remember: Elections in the Netherlands are on March 15th, less than 2 weeks away, and French Presidential elections start on 4/23/17 and end on 5/7/17.  And this week has seen the odds of a March rate-hike by the Fed exploded from the low 20s to over 90%.  All you need to decide is whether to follow the crowd, follow the realists, or follow market history.

NOTE: For non-clients who remain fully at-risk in the market, we believe extreme caution is warranted, especially by those who are nearing or are in retirement, and who are sitting on monies that it’s taken them 40 years to save.  For existing clients who sit protected in various Fixed Index Annuities (and as such can’t lose their principal or gains to a probable decline), we believe that a larger allocation to the indices is warranted in 2017, especially to the monthly point-to-point crediting method, given the upside earning potential of that strategy.  Upside interest credits of 15-24% with no downside is a glorious proposition.  As always, feel free to call us at the office if you have any questions.